Enter any cafe and you’ll likely find a selection of beans from Papua New Guinea, Brazil and Colombia, the biggest suppliers of the market.

Less than 1 per cent of coffee consumed in Australia comes from Australian beans.

But a small but innovative group of growers is looking to change that, overcoming the hurdles of labour costs, market share and cultural cringe.

Australian coffee has an earthy, nutty flavour and is relatively low in acidity and caffeine.

But it’s expensive to purchase, as growers must compete with overseas suppliers whose labour costs are substantially lower.

Mechanising the picking of coffee beans is one way they can edge out competitors.

“We’ve come into the market knowing that we’ll be competing against cheaper product,” said Rebecca Zentveld, who grows coffee in Newrybar in northern New South Wales.

“We certainly have to be clever and innovative with our farming, with using a harvester and processing equipment.

“WE CAN’T AFFORD TO HAVE A BIG LABOUR FORCE: WE NEED TO USE EQUIPMENT.”

Mrs Zentveld and her husband, John, expanded their business to a “crop to cup” model after they found selling beans wasn’t profitable.

“One of the major innovations of growers is really to value-add, to not see it as a commodity crop but to value-add right through the roasting and packaging and even to the cup,” Mrs Zentveld said.

“There’s only a handful of us who do that, but it’s really something we encourage growers to do.”

Other growers, like the MacLaughlin family in Far North Queensland, are getting creative with their products.

The business is experimenting with fermented and carbonated coffee, and uses coffee waste to create a range of body scrubs.

“The wine industry is constantly pushing flavour profiles and boundaries, so I can see the coffee industry growing a little bit like that,” general manager Candy MacLaughlin said.

“There are always people who want to try something new.”

Simon Brooks, a professional coffee taster known in the industry as a Q-grader, believes Australians know their coffee.

“We’re one of the most educated coffee drinkers,” he said.

“Basically, it all started down in Melbourne with the Italians and it’s just evolved from there.

“[In] 2001, when I first entered the industry, the second wave was just kicking in and that’s where they started looking at specialty coffee.”

“It’s a very small industry in comparison to the rest of the world,” he said.

“Some of it gets exported and it’s obviously a lot more expensive with a limited supply.”

But some growers say even coffee connoisseurs overlook local suppliers.

“I just don’t know if enough people are aware of the fact that Australia actually has coffee plantations,” Ms MacLaughlin said.

She said introducing local coffee to roasters and entering it into tradeshows were ways of spreading the word.

“Slowly, bit by bit, you will raise awareness and by then, people will start asking for it,” she said.

“THAT’S THE ULTIMATE AIM, FOR PEOPLE TO ASK FOR AUSTRALIAN COFFEE.”

Her brother Mark MacLaughlin thinks the industry should capitalise on what makes Australian coffee special.

“It’s really staying away from being a commodity to being a specialty product and trading on the nuances and features that Australian coffee brings to the market.”

WATCH THE REPLAY OF THIS STORY ON ABC TV’S LANDLINE ON IVIEW. 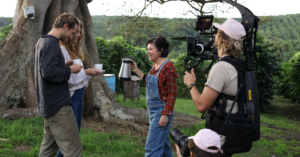