Everything you need to know about Australian-grown coffee

It’s fair to say that Australians are a nation obsessed with coffee. It’s a love affair that’s been brewing for decades, but lately it’s getting steamier than ever. Micro-roasters are popping up all over the country, sourcing, importing and roasting quality green beans from farmers around the world. The punters love being able to support small roasters, but the fact is that very few offer a truly local cup of coffee.

Australian-grown coffee accounts for less than one percent off coffee consumed in Australia. A tiny fraction of the market, but it’s an industry that simply can’t keep up with demand.

Rebecca Zentveld, President of the Australian Subtropical Coffee Association and Creative Director and Coffee Roastmistress at Zentveld’s Coffee, estimates that there are around 50 Australian growers in total, mostly in northern New South Wales and Queensland.

Australian-grown coffee accounts for less than one percent off coffee consumed in Australia.

“We’d love to see more land with coffee trees on it,” says Rebecca. “Across Australia, the demand for locally-grown coffee is there. Every grower is selling every bean [and] the demand is far exceeding the supply.”

“Since COVID, I reckon the demand for Aussie-grown coffee has doubled, if not more,” echoes Jason Jaques, General Manager of Jaques Coffee Plantation, located in Marbeea, Queensland. “More than ever people want to support locals, so they are reaching out to local suppliers. Once they try our coffee, they don’t want to go back.”

“Australians want to buy Australian-grown products,” says Rebecca. “We’d love to be a higher percentage of the coffee that is being consumed in Australia.”

Zentveld’s is located at Newrybar in the Byron Bay hinterland, where the cost of land is a big barrier to welcoming new coffee farmers. Zentveld’s was started in the late eighties by Rebecca’s father-in-law, John Zentveld, who migrated to Australia from Holland as a teenager. While many expressed surprise that a Dutchman was so interested in coffee, it was actually electrical importer John’s love of equipment that got him started in the industry.

“John Senior and my mother-in-law June moved up from Melbourne to Newrybar and started farming in their retirement years,” says Rebecca. “They were growing avocadoes until 1987, and then transferred over to coffee…

“He was very innovative and, more than hard-working, he was brave.” 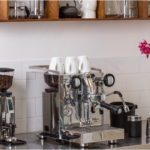 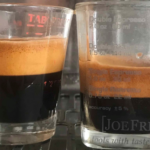